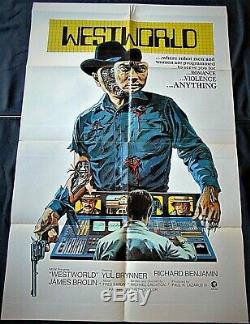 You buy what you see! This is not a \This is an original post produced by and distributed by the studio to be displayed in the theaters to Promote the movie. They are fixed according to the number of items ordered. Theatrical release poster by Neal Adams. Yul brynner as the gunslinger. Richard Benjamin as peter martin. James Brolin as John blane. Alan Oppenheimer as the chief supervisor.

Victoria Shaw as the medieval queen. Dick van patten as the banker. Linda Scott as Arlette, the french prostitute. Steve Franken as the technician delos shot dead by the gunfighter.

Michael Mikler as the black knight. Terry Wilson as the sheriff. Majel Barrett as Miss Carrie, madam of the bordello Westworld. Anne Randall as daphne, the serving-maid Who refuse the medieval knight's advances. Nora Marlowe as the hostess.