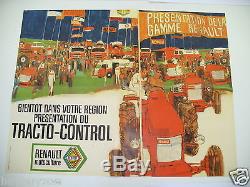 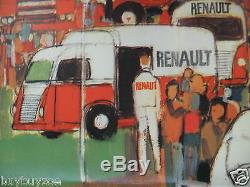 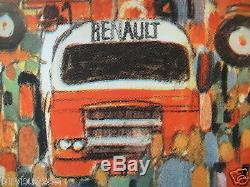 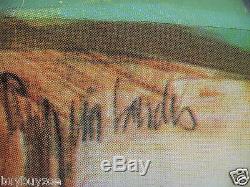 No copying - no repro. We are present every year. At 82 tractomania caussade France ..

You can contact us for backing up your posters. (Photo examples of our work and estimate on request). Renault Agriculture was the subsidiary. And assigned to the CLAAS group.

Last renault tractor, a tractor ergos (for dde), came out of the factories in 2009. In 1898, Louis Renault built his first car and went up the Rue Lepic in Montmartre.

In 1913, the milestone of 10,000 cars produced is crossed. Where it operates several thousand hectares of land.

He created his first tank farm, type gp from the experience of the First World War. The metal wheels or tires are introduced in 1926. The Renault range then extends in order to offer a solution in the various fields of agriculture.

During the second world war. Are bombed repeatedly, interrupting the production of tractors began at Le Mans. Louis Renault died in 1944 in obscure conditions.

The plant becomes mans from the release. The center of production of agricultural tractors Renault. His story then merges with that of the agricultural equipment division of Renault and agriculture. Saw the birth of the series whose d22. And the renault 421, which is produced more than 33 000 copies, series E and N and super are derived.

Renault then enjoyed success with its tractors with engines mwm. At Renault, the letters on a model indicate the fuel type and the number indicates the power. For example, for d22 model, is of diesel and 22 is the power that is. Foreign competition is growing; renault major competitors are fiat. In the late 1960s the market decline is a blow to all manufacturers and Renault needs to develop a more powerful range.

Renault makes an agreement with the Italian manufacturer carraro Agritalia. For light and special tractors. The tx cabin brings many comfort progress, access to mechanics. On tractors of high range. It is still present on the TEMIS. In the early 1990s Renault Agriculture decides a massive renewal of its range; and one sees many new models such as Ceres and the arès. But the market is very competitive and not profitable enough to renault eyes.

Therefore, after an agreement with John Deere. To sell an ordinary tractor.

And a partnership with Massey Ferguson. Decided to sell 51% of its shares. The signed agreement provides that CLAAS can increase its stake to 80% stake.

Renault pledging his side to keep 20% of its subsidiary until at least 2010. Following the marketing of tractors under the CLAAS brand and the reorganization of the sales network, strong sales growth in the following two years after this agreement, mainly due to significant growth in sales abroad, which increased by 22% in 2005. On 18 January 2006 Claas rises to 80% in the capital of renault agriculture. Tractors were delivered by Renault on five continents. The German CLAAS holds 2% of the capital renault s agriculture.

The tractors are god's name. \Adapted to the work of diversified farms. Their compact dimensions (2.50 meters of standard height) are provided for you to go almost anywhere. \It is mostly used for breeding and work in the fields.

Unfortunately for Renault this is not the most reliable tractor and it fails often. The celtis is powered by a 4-cylinder 4.5 liter turbo John Deere.

\Also at ease with QUA farm fields, it is ideal for loader work. The effort reaches maximum 8.8 tons at TEMIS 650. Moreover, hydrostable® suspended cab on its 4 points dappui, world exclusive, allows it to offer maximum comfort. Adds a new system of lifting tracto control electronics, a new generation of hydrostable® cabin and onboard electronics designed to facilitate the work of the farmer. With Atlès, the shifting (18 forward, eight reverse gears) occurs with a high fluidity.

With an instantaneous measurement of the torque motor, the jerks become practically imperceptible even when reversing the direction of travel. The dimensions of the box. Are commensurate with the tractor outline.

The thickness of the casings as the size of the gears. In helical, are impressive, designed to transmit power in all situations. Another innovation on Atlès, maneuver of reports that can be easily programmed and call a press of the tri-functional control (ctf).

This ctf control combines three functions: raising and lowering gear ratios, the storage process and the direct triggering of report selected maneuver, acceleration and deceleration of the engine. On Atlès, accessibility and maneuverability ELC has been optimized to the maximum. The release, the ladder rack, the controls on the rear of each wing, make it possible datteler and uncouple easily.

\It is specially adapted to pass through the trees and vines. Handy and stable, easy to drive and maneuvering devices, and the dionis fructus sadaptent all situations, in all environments.

The dionis fructus and offer a wide choice of options: choice of powers available in two-wheel or four-wheel drive. Headband or particularly comprehensive and effective cab, the lifting of the range dionis fructus tractors to control very precisely the work tools: commands manage the position, of effort control, the sensitivity and speed of descent, the electronic version still giving more accurately the soil working tools. The tools are supported with safety, thanks to the permanent maintenance of speed and flexibility of the powerful hydraulic unit. \Indeed, it is at ease in all situations, in buildings and in the field. Designed in the offices of study design renault mainly glazed organized at best cabin blades is like the rest of the range, optimized to the maximum.

The tools and the field can be demanding, performance and transmission quality [of] Pales ... Bring flexibility and comfort of use, traction as the PTO. Ergos (77 to 97 hp). Is the last to wear the brand tractor Renault. \Conceived and designed for specific jobs. The reinforced structure and balanced, its wheelbase, its cabin correspond to intensive use with tools of any kind, they are brought into lateral, rear or on feeder types. To improve working conditions and reduce fatigue, ergos features a comfortable space. The large glass area, interior space, lergonomie orders, linsonorisation push, and air conditioning are all filtered of elements that make the cockpit of ergos a place where one feels good. The mechanical versions are equipped with TWINSHIFT reverser systems that can benefit from a smooth ride. Ergos is also equipped rgopilot® system, which controls all the tools via a single command!

An innovation gold medal at Sima 2001. To improve the accuracy of movement and fit perfectly ergos the holder to use of tools, Renault has developed a hydrostatic transmission equipped dun electronic controller. Available on ergos models 100 and 110, Hydroshift is an exclusive Renault improving working conditions. Agriculture Renault also released a model, the 851, which was one of the best models made by Renault. Renault Standard 293-tei 20 hp, produced in 113 copies from 1930 to 1938.

Renault yl 20 hp from 1933 to 1938 produced 529 copies. And are equipped with a 4-cylinder engine. 1921 type tractor ho will be the first to abandon the tracks in favor of conventional wheels. Several developments and a version gasifier. French Prime tractor diesel engine.

1960 to meet the demand for powerful tractors, renault important to Italy. The super Motomeccanica 108 60 hp pending the release of 385 / master.