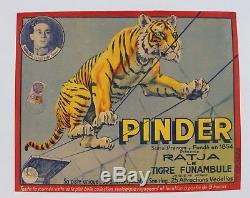 No copy from us no copy we sell only original period posters. On linen, linen backed in our own studio. Secure roll Insured shipping for value. We send in secured roll insured for the value. This poster was restorations retouching.

For backing up your posters. (Photo examples of our work and estimate on request). George and william pinder pinder. The pinder circus is a circus. By william pinder brothers and george. At the origin it is called circus britania, named after the ship whose sails will be used to realize the marquee. It changes hands several times during its history, and thus will be directed by charles Spiessert jean richard. The mascot of this circus is the elephant.

His tour always starts in mid-January to towers. In 1854 in England, and george william pinder, art equestrian specialists, create their own circus.

A circus which, originally, was not wearing name pinder, but of britania, the ship of a name including sailing became the cover of the tent of the two brothers. After shooting some time in England, significant competition leads to the circus sexpatrier in Holland in the spring of 1868 and this is in September that crowd for the first time on French soil, to re-embark a few weeks later to langleterre. Sen in 1869 following a tour in England and later in the season, the return to France. Habit is taken, and the back and forth between France and langleterre multiply before final implantation in France in 1904 under the direction Darthur pinder, son william pinder. Following the death Darthur in 1924.

The circus is taken charles Spiessert, which will be headed until his death in 1971. At the occasion of the auction of 16 July 1928, Charles Spiessert descendant of Hungarian fairground, went purchaser of the capital equipment and circus animals pinder.

Very soon this passion for mechanics will modernize its circus and providing high quality performances. In 1932, he bought a property in chanceaux-on-choisille.

A small village a few kilometers towers. Property which will allow it to establishing a rear base for his circus.

After the second world war, the cirque pinder under his leadership will experience its glory, with performances more interesting, road equipment at the cutting edge and especially the success with the assistance of the ORTF. In the 1960s, the pinder circus is the partner of the ORTF. And is called \It hosts roger lanzac. For radio show's the game of 1,000 francs. And TV show's runway to the stars. When she is not touring circus Winter paris. In 1971, Charles Spiessert dies. His children took up the torch, but the circus, which runs through a financial crisis, will eventually be sold at the end of the year 1971 to actor Jean Richard. At the beginning of the year 1972, the actor richard jeans. Became the third owner of the circus pinder and from the beginning of the tour, his name appears in blue on all the circus vehicles. The circus becomes the circus' pinder jean richard \May 10, 1973, Jean Richard is a victim of a serious road accident, and this is when financial difficulties begin. Also owner of the amusement park's sea of ​​sand. Quil created in 1969, but the new paris Racecourse. It is struggling to manage all of its business, dautant that it continues at the same time his acting career, taking particular star of the series of investigations maigret Commissioner.

After a first filing for bankruptcy. In 1978, Jean Richard can not prevent a second a few years later. June 17, 1983, circuses and pinder jean richard and jeans trade name richard, will be sold to gilbert edelstein. Gilbert edelstein, former collaborator of Jean Richard, bought the assets of the company after the bankruptcy of the latter. Gilbert edelstein is from dune family of merchants fabrics and not, as this is often the case, dune circus family.

First of rock concert organizer in the 1960s, he opened a restaurant later in Lyon, his native city. This is where quun friend, André vylar him this jeans actor Richard. John Richard offers her a commercial station as well as advertising management, post that he held for seven years before founding his own company \ In 1998 he bought south of Paris in the municipality of perthes en gâtinais a large property which includes a castle, a farmhouse and 130 hectares of woods, which will be his one hand a rear base for his circus (mechanical workshop and painting) and secondly to create a park of attraction on a circus theme, called \Is the director: his dressage number, with sixteen lions and tigers, is unique in the world, he now has a new group of beasts that consists solely of lions and white lions, this number is also unique. The on the latter, sophie edelstein. Holds the position of artistic director of the circus. She is also known for his magic numbers and its interests in television shows such as France has an incredible talent. The item \The seller is \This article can be shipped worldwide.
moviepostgrandphotoshop120x160cmfrenchpostersoriginal68x104cmautomansraremounted on canvaslithoshowsposterlithographycircusvintagecinemawarsracedisplaysexhibitionold originalparissheetfranceverywartravelstaroldsignedfilm