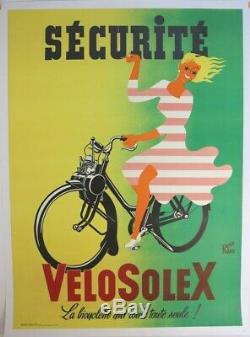 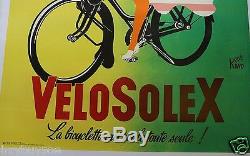 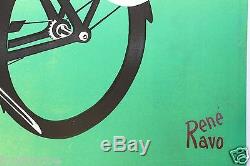 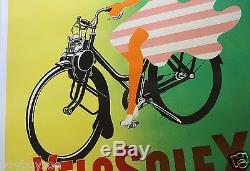 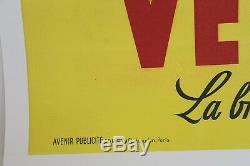 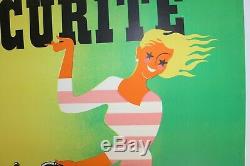 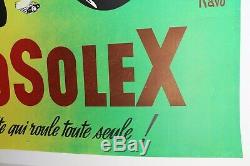 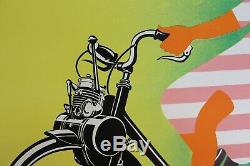 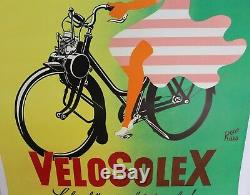 120 cm x 160 cm. (+ 4cm ideal stabilizer for framing or pins). There is no date on the poster. The poster of the framework model \In 19 64 outputs the new main girder framework square sheet and footrest (see description below).

A small time spot to the right of the dress - little stain right o n the dress. It is written on the poster. The bicycle that rolls alone! You can contact us for backing up your posters. The fabric is a process (reversible) backup posters.

Do removing any value to the contrary posters. (Almost all proposed posters beautiful auctions are interfaced). Photos and examples of our work rates on request. Interlining interlining in our own workshop - restoring old posters.

It is with great pleasure that we will answer all inquiries on the stabilizer and the old posters restoration. Linen backing can in our own studio. We are reliable to 8 big french linen back sheets (660 cm x 240 cm). We send in secured insured roll.

Please have a look to our other posters. Our work: linen backing and restoration of old posters. We can do big sizes, examples pictures and prices please ask. Born June 12, 1904 to etampes (Essonne) who died on 6 January 1998.

René ravo is a poster artist and commercial artist who began his career in perfect self, performing industrial designs. Engaged in thompson, it is for this appliance brand he created his first poster. He left that company in 1923 to join the depuybelle brothers, owners of advertising inserts in the illustration. For several years, reborn ravo sign advertisements in this magazine. He designs designs for delahaye cars between 1930 and 1933.

He participated in 1937 in the exhibition organized by Jean carlu under the Universal Exhibition of Arts and paris techniques. He met Paul Nicolas, director of jazz magazines and sell and becomes his friend.

Therefore it often uses its services to illustrate its publications. Thus reborn ravo sale contributed to the magazine until 1950. In 1933 he really began creating posters.

He briefly studied under Paul colin and illustrates campaigns for national agencies such as the national lottery and s. He also produced posters for broadcasting: tsf, radiola, Pathé-Marconi, and for the most diverse products as Spontex (1947), delage cars, Jaz watches and clocks (1939), the gypsy cigarette (1951) Solexine new green capsule (1955), seccotine same adhesive iron (1955) solex bicycle ...

In the cultural field, he designed the poster of the sixteenth exhibition for aviation, in Paris, in 1938. After the second war World, reborn ravo illustrates movie posters for gaumont.

He also became editor, some of his creations, including the National Lottery, marked \Skip to navigation. The VéloSolex (trademark), more commonly known moped is a moped. Whose engine was created by the mechanics of society. It was produced over seven million, in several versions, from 1946 to 1988.

He could drive in France. Unlicensed and from the age of fourteen. \Was very popular among students. It was sort of the 2CV. Historical production of VéloSolex was ensured first avenue of Verdun in courbevoie.

Then in (at least) two other plants in asnières s / seine. (71000), before being combined in 1975 to St. After the acquisition of the brand by Motobécane. The brand also produces bicycles. In the early 1970s an attempt to revive the VéloSolex took place in Hungary. From 1998 to 2002 (impex company). In 2006, the Solex brand and vintage aesthetic. Were taken to an electric scooter designed by pininfarina. The VéloSolex is not the first motorized vehicle on the front wheel or the first to have a transmission.

The iconic brand model, the S3800. Named familiarly the \Is driven by a small motor provided on the front wheel. The engine block located above the wheel contains the tank. The whole transmission and ignition system. Everything can be incidentally surrounded by a bumper.

Descends along the front wheel. Is placed by means of a lever over the front wheel, it drives directly by a \The start is by pedaling or \This type of design may cause relatively rapid wear of the tire, and a transmission. Less effective when the tire is wet or even impossible when starting froze overnight and the roller has not been cleaned the day before his footsteps mud. The engine moped is located on the front wheel. The bumper protects the flywheel and the metal tank.

The engine stop is through a. By pulling a lever on the handlebars near the right handle. Such as an electric ignition.

There are also no acceleration Rotary handle but this controller deceleration right hand, coupled to a second handle locking and decompression, connected to the engine parts by a simple steel rod. Is provided by a brake pads. At the front and a small drum brake. The front brake lever is coupled to the control deceleration of the carburetor and disengagement. Brake adjustment before is done easily without tools, by winding the cable around a latching key. The transmission can be disengaged. Using the lever surmounted by a gripping ball, the engine being tilted back and held by a locking tab, so as to completely release the wheel, allowing the use of the vehicle. The framework is without suspensions.

Metal packed is accommodated in the rear end in the rack. From prototype to the e-Solex and today VéloSolex. The first VéloSolex was sold in 1946.

Since then, seven million copies were sold in France and abroad, particularly in the Netherlands. Whose geography is characterized by a bit rugged. Note that the engine of Dutch VéloSolex. Were brown and not black. Importers and manufacturers under license VéloSolex were present even in fifty-seven countries. The models are as follows. The prototype in 1941 that there are only few copies. The model said \The fate 660 in 1955.

The 2200 was released in June 1961; production begins with the number 2202001 engine and power reached. It has a new, more powerful motor for the first time, a spark suppressed, new lift lever and decompression lever. This model is manufactured in two engine versions: the v1 and v2.

The S3300 released in 1964, the appearance of rear drum brake, the frame is pressed steel. Assembly bolts instead of welded tubes (similar to future S3800). The f4 released in 1966 is a children's bike as a scale replica of 2/3 S3300; it has a metal frame with a small plastic injected engine with pawl. To mimic the engine noise.

The iconic brand model, released in 1966. His production begins with the number 3800001 engine; the cycle-part is identical to 3300 but more elements of more powerful engine are new: cylinder crankcase, crankshaft, carburetor, fuel pump, headlight cover, etc.

Later, the tank appears plastic. Other elements will evolve as the flap, the rods, the rack, the bottom bracket, cylinder, ring the bell. The color appeared in 1968 with the luxury and super luxury S3800 S3800 in 1970 and stopped in 1971 and resumed in 1986; However, it was already VéloSolex \In 1968, the turning handle appears on the model.

The 5000 was released in 1971 with small wheels, it is available in four colors; yellow. Micron fate in 1968, with even smaller wheels; it has the S3800 engine but has no pedals; it is likened to a moped requiring a1 permit. The 4600 was released in 1974; Flash 1969 (now 6000) is equipped with disc brakes; the engine, fan cooled. Is placed in the bottom bracket with a side gear shaft. The Solex Tenor, released in 1972 is a more \This is the only model equipped with an engine that is not manufactured by the brand:. Are equipped with a motor Franco morini gyromat then replaced them.

There are also very rare. Equipped with a French engine morini four-speed. The Black'n roll S4800 is the Mopex brand. He was released in 2005 with the approval.

It is a modernized version of the S3800. The electric VéloSolex, electric bike.

The Solexity, a bicycle released in late 2011. The power-assisted transmission is no longer chain but gimbal. 45cc 1953 well maintained with his bumper.

Adaptation of a moped scooter Hungarian Bercy. Flash moped, then the 6000 model shaft drive without gimbal. The sole tenor, in real moped engine (Franco morini then anker laura), with a rear suspension and a gearbox, released in 1973. Electric model like the original, but in fact powered by the rear appeared in late 2006. The roll Black'n 4800.

Hybrid power and essence of society Mopex award at Lépine contest. 2006 was invented and developed by denis Mazzilli and not Mopex. Denis Mazzilli, founder of the company and brand \In 1998 and created several prototypes: folding roller, the galet'x the harlex its roller, the roller sorting. All its models are filed with the INPI. The VéloSolex 4800, manufactured in China.

(France) and distributed in the United States. Thus, several models have been adapted to the Dutch market, Italian, American, where we can see these items among collectors and even in countries under former French colonial empire. The most expensive and fragile piece of VéloSolex engine is the flywheel. Which is located on the left of the engine, which gives it its cylindrical shape: a shock caused by a fall on this part may snapping the cover-wheel made of nylon. And can render useless the flywheel aluminum.

Also, many owners VéloSolex they take bumper optional chrome tubes (present on some photographs). There are also options a hubcap.

Aluminum saddle stem, a footrest of aluminum, a front apron sheet. Positioned on each side of the frame protecting projections mud, additional reservoirs, Solexine of cans holder held by a nut. Av, and many others too numerous options to be named in full. Present in the flywheel is a fragile wear part which must be replaced more or less frequently depending on its quality of manufacture and use. In 1947, the manufacturer recommended fuel as a mixture anti scale.

Distributed by the French Society of Petroleum bp. (Whose origin is debatable), was sold in cans of two liters, in general. Today, just a gasoline blend without.

And 2% of synthetic oil. For the VéloSolex work properly. If it happens that there is a fat oozing at the wheel of earlier models in 3800, this is due to wear of the small clearance between the crankcase. And a ring on the crankshaft. Or any other reason not to use a current synthetic oil which there is no evidence so far that it is detrimental to the engine.

The low consumption of VéloSolex about 1.4 l / 100. Will be highlighted in its advertising with the slogan in the late 1960s Solex equipped with a bumper, a Solexine can and bags. From 1967 the colors of Solexine brand. Old wall Advertising Solexine to neyron. The mixture of distributors were in the BP service stations.

And most devices allowed to dose, with a knob, oil percentage. A Solexine distributor existed on the Saint-Michel Boulevard. There are still few in France Adjustable oil distributors percentage gasoline where including former VéloSolex can feed; he finds one of its kind in Levallois-Perret.

Solex Solex racing during the festival rock'n. Every year, sports competitors are found in Nouziers races. At the music festival Rock'n Solex. Are organized since 1967 by Solex racing categories origin. Bringing together thousands of fans and curious on campus.

Where various events are linked: endurance. The item \The seller is \This article can be shipped worldwide.
120x160cmsheetraceautoveryshowsrare68x104cmcinemafranceparismanstraveloriginalfrenchstargrandpostold originalexhibitionvintageposterdisplayswarforsignedlithographymounted on canvasoldposterswarsauthenticcircuslithomovie