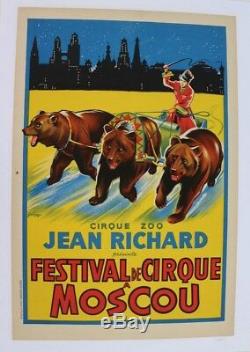 No copy from us no copy we sell only original period posters. On linen, linen backed in our own studio. Secure roll Insured shipping for value. We send in secured roll insured for the value. For backing up your posters. (Photo examples of our work and estimate on request). Jean richard circus was founded in 1957. Jean Richard has another passion, animals. That probably comes from his horse breeder father. Becomes so important that it creates a zoo. In the late fifties, where he settled.

He participates in galas with the cirque medrano. Then founded the circus Jean Richard in 1957 in partnership with families and Grüss Jeannet and buy the pinder circus. John Richard was at the height of its popularity when a terrible car accident, which occurred May 10, 1973 while he had discovered his circus ravaged by fire, erms he employed himself in his book of memories of my life without a net. Six weeks in a coma: the France lived for a month and half the pace of health bulletins.

But Jean Richard was a strong constitution and went up the slope. He devoted himself more fully to his passion even circus, launched the new racetrack in Paris. Owner until 1978 the \He received in 1980, the national grand prize circus after getting state recognition of circus as a cultural activity in itself. The attraction of this lover of animals for horses universe. Also be another facet of a character whose favorite sport was naturally riding. He was a director since 1971 of the Humane Society.

He will pass this love with viewers with series these animals are called animals and the show about circuses in the world. 1955: founded the zoo jean richard. 1957: founded the first circus Jean Richard in partnership with families and Grüss Jeannet. 1971: sign for the television series that these animals called beasts. 1972: takes the pinder circus.

1974: creates TV programs on circuses in the world. Pierre fenouillet jean richard and his circus or the story of a passion. Red nose, old boucau (1998). Jean Richard, my life without a net, Paris, Robert Laffont, 1984. The item ickets, posters \ pub \ old posters \The seller is \This article can be shipped worldwide.
68x104cmpostersold originalcircusracemansgrandfilmlithoautowarpostfrenchvintagefrancemovieposterrarewarsverysignedsheetphotoshopdisplayslithographymounted on canvastraveloriginal120x160cmexhibitionstarcinemaoldshowsparis